A named lectureship at Yale School of Management supports the school’s larger initiatives of entrepreneurship. Its inaugural appointee, Teresa Chahine, will work with Yale students who are eager to create lasting solutions to societal challenges. 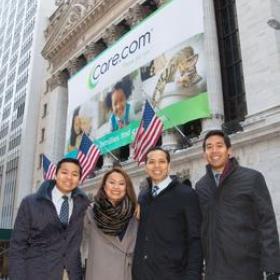 A year ago, Teresa Chahine was working to improve the lives of refugees and other disadvantaged people in her native Lebanon. Today, she works with Yale students eager to create lasting solutions to societal problems.

Chahine, who holds a doctoral degree from the Harvard T.H. Chan School of Public Health, has long been concerned with systemic challenges facing marginalized people in low-resource settings. She found an answer in social entrepreneurship, an approach to creating businesses and nonprofits aimed at improving lives. In 2012, she launched the venture philanthropy organization Alfanar (meaning “lighthouse” in Arabic), to strengthen social enterprise in Lebanon, an experience that led to a teaching stint at Harvard and the publication of her book, Introduction to Social Entrepreneurship, fast becoming the definitive text in the field.

Now Chahine is on Yale’s campus to train students as the first Sheila and Ron ’92 Marcelo Senior Lecturer in Social Entrepreneurship. “The students here have a hunger to make a difference with their careers,” Chahine said. “I’m inspired by this interdisciplinary environment where everyone is thinking about ways to change the status quo.”

A scholar and a mentor

A generous contribution from Sheila Marcelo and Ron Marcelo ’92 established the lectureship at Yale School of Management (SOM), complementing larger initiatives in entrepreneurship at Yale SOM and across the university. As the inaugural Marcelo Lecturer, Chahine will teach, write case studies, and mentor students. Her first class, Innovation and Entrepreneurship in Public Health, is offered this semester. In the spring Chahine will teach Introduction to Social Entrepreneurship. “The fall class is case-based,” Chahine said. “We’re examining different examples of social entrepreneurship throughout the world. In the spring I’m going to work with students as they launch their own social ventures and experiments.”

Chahine is based at Yale SOM, but she will work with students across campus. “I’m excited to collaborate with students from Yale College and the graduate and professional schools,” Chahine said. “Yale has a great entrepreneurial spirit. There are a lot of exciting things happening at Tsai CITY and Yale SOM’s Program on Entrepreneurship fosters exactly the right kind of energy for emerging entrepreneurs.”

Sheila and Ron Marcelo, who just celebrated his 25th Yale College reunion, are long-time champions of entrepreneurship as a vehicle for social change. In 2007, Sheila Marcelo founded Care.com, a web-based service that connects families in need with caregivers. She believes that schools like Yale have a major stake in the future of social entrepreneurship. “Entrepreneurs are by their nature risk taking, problem solving, and innovation oriented,” she said. “If you think about the demands on leadership in the future, especially in a very interconnected world, they’re also going to have to understand different systems and how they’re interconnected, particularly the interplay of business, society, and government. We think the interdisciplinary learning that happens at Yale can be critical for entrepreneurs.”

The Marcelos hope the new lectureship will incubate further interest in entrepreneurial ventures that make a social difference. Ron Marcelo, a member of the Care.com founding team, said, “We wanted to reach students who are very capable and very ambitious and demonstrate that you can use the tools of private enterprise to drive change across major systems.”

“Yale SOM students are always thinking creatively about what a business can do,” said Edward A. Snyder, the Indra K. Nooyi Dean of the Yale School of Management. “The Marcelos’ gift is a catalyst for our students’ imaginations and will empower them to take bold risks for the common good. Thank you, Sheila and Ron, for helping us shape the future leaders of business and society.”