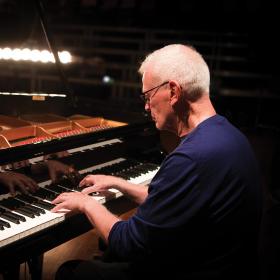 When pianist Daniel Graham ’63 MM first arrived at the Yale School of Music (YSM), he was struck by the richly collaborative culture he discovered there. “The instructors welcomed me with open arms, inspiring and supporting me at every step. It was a privilege to study with them. Now, many years later, I want to ensure that this cooperative and creative environment continues indefinitely.”

To give back to the school that “made a significant imprint” on him, Graham established a charitable gift annuity (CGA). “Creating a CGA to benefit YSM was the perfect way to express my gratitude for the valuable education I received as a student there. With the knowledge that funds from my CGA will be available to YSM in the future, the school can keep making bold and adventuresome plans for its students.”

“The CGA allows me to make a gift now while receiving fixed payments for life beginning at a time I designate,” Graham explains. In addition to his CGA, Graham has also named the school as a beneficiary of his IRA and his brokerage account. “It feels great to support the future of music at Yale,” he reflects.

After receiving his degree, Graham enjoyed professional success as a tenured music professor, performing and recording artist, and nonprofit development executive on the West Coast. Since retiring in 2015, he has returned to the piano after a twenty-eight-year hiatus; he is currently working on a series of video and audio recording projects. “Having the same capacity for playing at age 80 as I had when I was younger has been such a gift,” he says. What’s next for Graham? “I’m determined to play Carnegie Hall for my 100th birthday,” he laughs.