New Building, New Era for the Sciences at Yale

In October 2019, members of the university community gathered to celebrate the opening of the Yale Science Building. The space signals a new and important chapter in the university’s history of science research and discovery.

New Building, New Era for the Sciences at Yale

On October 24th, members of the Yale community gathered to celebrate the university’s newest addition—the Yale Science Building. Featuring state-of-the-art technology, a rooftop greenhouse, and a new imaging center, the facility houses forty-five research laboratories and a lecture hall, and its adjacent pavilion provides dining and meeting spaces that serve all of Science Hill. The new building opened to faculty members and students in August 2019.

Anna Pyle, the Sterling Professor of Molecular, Cellular, and Developmental Biology, welcomed attendees to the dedication and to the building itself. “This building is a testament to Yale’s wise recognition that, as a great university, it must sustain and expand its strength in science and technology development,” she said. “But it is also a testament to the fact that Yale believes that scientific communities must be welcoming environments that foster collaboration among investigators and with our colleagues in the social sciences, the arts, and the professional schools.” 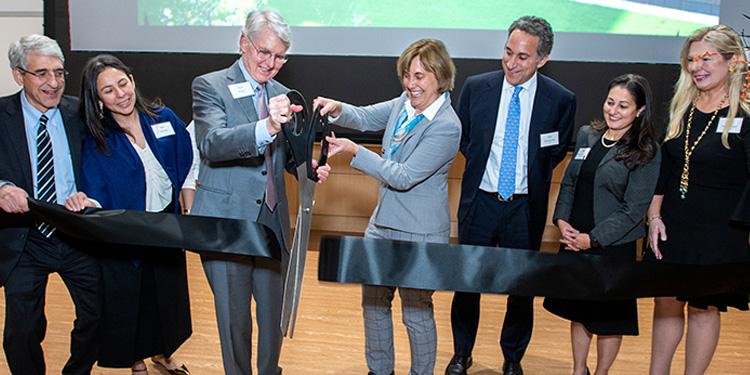 A new home for premier research

Among the honored guests were Edward P. Bass ’67, David Schamis ’95, Rebecca Vitas Schamis ’00 MBA, and Nancy A. Stratford ’77, all of whom made generous donations to support the new building. Following Pyle’s remarks, attendees heard Deborah Berke, dean of the Yale School of Architecture, give a tribute to architect Cesar Pelli, the designer of the Yale Science Building who died in July. President Peter Salovey ’86 spoke to the importance of the new building to Yale’s campus and research efforts, and a ribbon cutting, reception, and tours of the building rounded out the evening.

The dedication ceremony took place in the Yale Science Building’s O.C. Marsh Lecture Hall. Bass, as the lead donor to the Yale Science Building, requested the lecture hall be named for Yale paleontology professor Othniel Charles “O.C.” Marsh B.A. 1860, who was known for his many dinosaur discoveries. The lecture hall is one of the largest on campus—capable of holding nearly 500 people—and hosts classes in the sciences and humanities, special lectures, and Peabody Museum programming, among other events. In gratitude for Bass’s support, Salovey presented him with a framed reproduction of a letter Charles Darwin sent to Marsh in 1880, praising the paleontologist’s fossil collection and how it lent support to the theory of evolution.

The Yale Science Building is designed to support collaborative scientific research. Laboratories host researchers in the Department of Molecular, Cellular, and Developmental Biology, the Department of Molecular Biophysics and Biochemistry, and the Department of Physics, while student offices and gathering spaces are interspersed among faculty offices. This layout, along with the building’s lounges, redesigned plaza, Schamis Terrace, and connections to other Science Hill facilities, drive “collisional frequency,” or the propensity for scientists to cross paths, build relationships, and launch the multi-disciplinary studies that are increasingly essential for modern discovery.

Additionally, as part of Yale’s commitment to sustainability and reducing its carbon footprint, the Yale Science Building was designed to ensure optimal energy efficiency. Every system within the building has been assessed for its impact on energy performance, and the university is seeking LEED Gold certification.

In his remarks, Salovey said, “In a hundred years, when people look back to this moment, they will see that this was when we put a stake in the ground for our aspirations in research and education. They will see that this building played a vital role in fulfilling our shared vision to accelerate the pace of scientific discovery at Yale to benefit the lives of people around the world.”