Thanks to a transformative gift from John Jackson ’67 and his wife, Susan, the Yale Jackson Institute is poised to become the Yale Jackson School of Global Affairs, a full-fledged professional school with a broader mandate and enhanced resources.

For nearly a decade, the Yale Jackson Institute for Global Affairs has been a hub of teaching and learning, where faculty members, practitioners, and students cultivate expertise with a global reach. Now, thanks to a transformative gift from John Jackson ’67 and his wife, Susan, the institute is poised to become the Yale Jackson School of Global Affairs, a full-fledged professional school with a broader mandate and enhanced resources.

“I am deeply grateful to the Jacksons for their tremendous support and for the passion they bring to global affairs,” said President Peter Salovey ’86 PhD. “Their generosity will help us to write a new chapter in our history.”

In 2009, a gift from the Jacksons helped Yale create the Jackson Institute. Their latest gift, along with contributions from additional donors, will launch the Yale Jackson School.

“We believe Yale is ideally suited to create a school that prepares a new generation of globally engaged leaders and generates ideas that improve the world,” said John Jackson. “We are delighted to help the university advance this vital mission.”

“We are very proud to be a part of this,” said Susan Jackson. “The world needs the best of what Yale brings to global affairs. We believe that faculty and students in this new school can change the course of history for the better.” 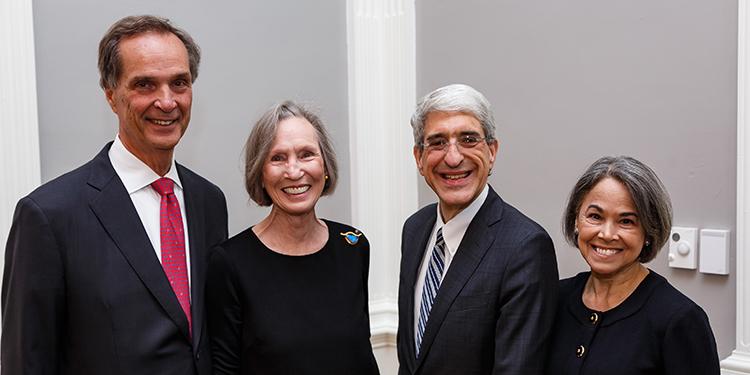 The recommendation to create the school resulted from the work of an advisory committee tasked by Provost Ben Polak to consider the strategic direction of global studies at Yale. The committee conducted interviews across the university and at peer institutions and solicited input from Yale students, faculty, and staff.

“With the Jackson Institute, Yale already has a vibrant convening space for education and scholarship on issues of a global nature,” said advisory committee chair Judith Chevalier ’89, the William S. Beinecke Professor of Economics and Finance at the Yale School of Management. “The Yale Jackson School of Global affairs will build on that strong foundation—and Yale’s strengths in a variety of academic and professional fields—to help set the agenda on how to address global policy issues.”

The Jackson Institute offers an undergraduate major and two graduate programs in global affairs, along with courses taken by hundreds of additional students from across the university. Focus will remain on quality of research and teaching in a close-knit scholarly community marked by interdisciplinary collaboration.

The school will retain the signature programs of the Jackson Institute. Students will continue to engage with and learn from distinguished practitioners, including renowned diplomats, military leaders, and journalists, through the Jackson Senior Fellows Program. Current senior fellows include former U.S. ambassador to Syria Robert Ford, Middle East expert and author Emma Sky, and U.S. army general (ret.) Stanley McChrystal. Additional programs include the Kerry Initiative, led by former U.S. Secretary of State John Kerry ’66, a distinguished fellow for global affairs at Jackson. The Institute is also home to the Johnson Center for the Study of American Diplomacy and hosts the annual Kissinger Conference with former Secretary of State Henry Kissinger.

While the Jackson Institute has been focused primarily on education, according to the committee report, the Jackson School will also embrace the research mission of the university.

“The research conducted at the new school will provide the intellectual foundation for evidence-based policy-making,” President Salovey said. “Now more than ever, our world needs creative ideas to help end global conflicts and heal individuals and communities. By establishing the Yale Jackson School of Global Affairs, Yale will continue to fulfill its responsibility to teach students to become leaders who will tackle challenges with wisdom, facts, insight, and courage.”

The Yale Jackson School and its future

Fundraising efforts for the school are well under way thanks to the Jacksons’ lead gift as well as support from donors including Antoine van Agtmael ’70 MA, Vikrant Raina ’89 and Pratima Abichandani, Howard ’95 and Clarissa Wang, and others who have already come forward to support this historic undertaking. Additional donor support will be essential to ensuring the school can open as projected in fall 2022. Plans call for the appointment of a dean and the hiring of thirty ladder faculty members who will hold joint appointments with other departments or professional schools.

“Expanding the Jackson Institute into a school of global affairs is a natural and exciting next step,” said James Levinsohn, director of the Jackson Institute and the Charles W. Goodyear Professor in Global Affairs. “It will allow us to attract the world’s best talent, including renowned practitioners who have had significant impact in a range of areas, a world-class research faculty whose work will contribute answers to the pressing questions of the day, and wonderful students from across the globe.”

“A half-century from now,” the advisory committee report stated, “Jackson should stand as one of the world’s leading centers for research and teaching on policy issues of maximum global importance. The ultimate goal of scholarly research—on key global problems such as international relations, war, trade, economic development, ethnic conflict, migration, health, and climate—is to change the world and shape a better future for all of humanity.”