Serkan Savasoglu ’96 still has the letter.

Covered in stamps and battered from more than a month in transatlantic transit, the message had made its way from New Haven to Savasoglu’s Istanbul home. Postmarked June 24, 1994, the note from renowned economist and Yale professor James Tobin congratulated Savasoglu on his excellent performance in Tobin’s intermediate macroeconomics course.

“It is gratifying when a student really grasps what the teacher is trying to get across,” Tobin wrote. His main reason for reaching out, however, was to ask Savasoglu to join him as an undergraduate research assistant.

“It felt incredible,” Savasoglu says. “I didn’t even know the job existed, and I couldn’t believe the letter even got to me.”

This was the start of a mentorship and friendship that would change the course of Savasoglu’s life and later inspire him to give back to the Tobin Center for Economic Policy. 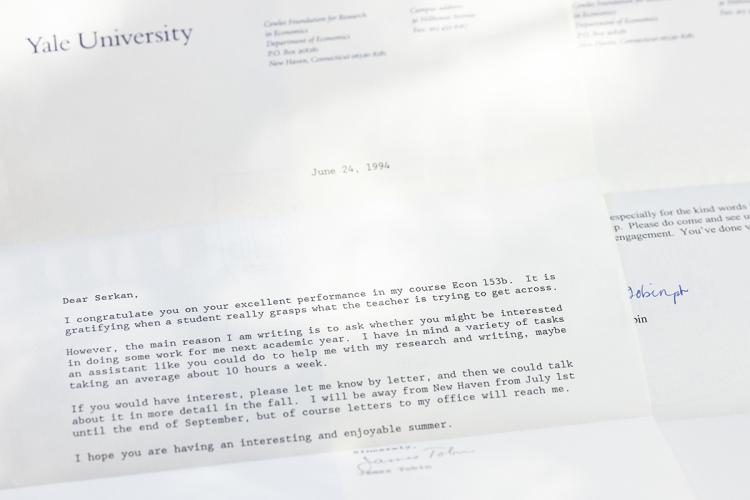 James Tobin’s 1994 letter to Serkan Savasoglu inviting him to be an undergraduate research assistant.

A Foundation for Connection

Savasoglu met Tobin when he enrolled in his macroeconomics course as a sophomore. He remembers the small class as largely discussion-based, with Tobin prodding his students to take sides and make arguments about the economic debates dominating the day’s headlines.

Savasoglu recalls that the Federal Reserve was raising interest rates at the time, and each student had to make the case for or against the decision in front of the class.

“He got into serious back-and-forth discussions with us as if we were real policymakers,” Savasoglu says. “Earlier in his career, he had a major influence on how the country was being governed, so it was amazing to get into that kind of debate with him. It felt far more real than just reading things in a textbook.”

Tobin, who had served as a member of John F. Kennedy’s Council of Economic Advisors and was a consultant to the Board of Governors of the Federal Reserve, earned the Nobel Prize in Economics in 1981.

Savasoglu started working with Tobin as soon as he returned to campus for his junior year, helping calculate Tobin’s Q, a ratio for assessing the relationship between market valuation and intrinsic value. He also helped Tobin prepare for conferences and proofread his writing.

“He had a brilliant mind and had a very significant influence on me,” Savasoglu says. “I was very young when I started working for him, and he taught me so much about prioritizing intellectual curiosity and excellence in whatever you do. There was a connection beyond just the books and the grades.” 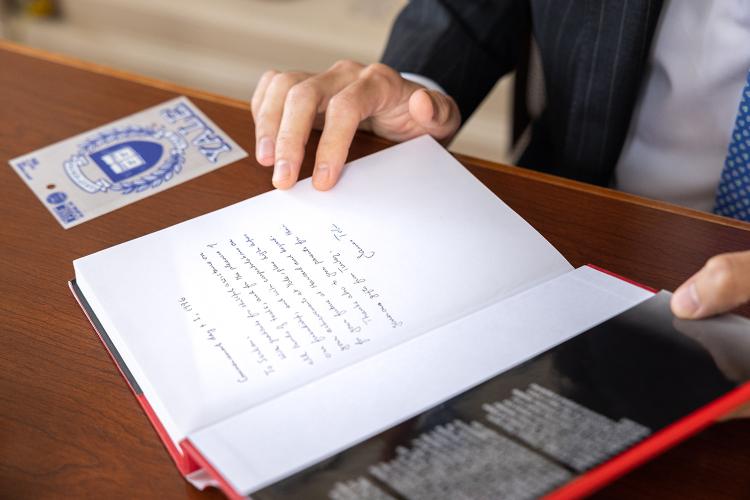 Tobin gave Savasoglu a copy of his book with an inscription thanking him for his contributions as a research assistant.

Savasoglu followed in Tobin’s academic footsteps by pursuing a Ph.D. from Harvard in business economics. He now works for Morgan Stanley. The two always stayed in touch, catching up in person at least once a year until Tobin passed away in 2002.

One of his fondest memories of Tobin outside of the classroom was when the professor invited Savasoglu and a graduate student up to his Vermont home for a ski weekend.

“I had never skied before and had no idea what I was doing, but it was incredible,” Savasoglu says. “He was an excellent skier, and he was in his late 70s at the time. He cooked for us, and we played Scrabble. He was a very modest, kind individual who could connect with anyone in a really friendly way.”

Recently, Savasoglu made a gift to the Tobin Center for Economic Policy at Yale, a new enterprise named for James Tobin that advances data-driven examination of domestic economic policy. His gift supports research assistants like he once was.

“Tobin put so much of his life into his undergraduates and his research assistants—they were sometimes called Tobin’s Army,” says Steven Berry, the Jeffrey Talpins Faculty Director of the Tobin Center. “They’re all so remarkably devoted to his memory. The Tobin Center has dozens of undergraduate and graduate research assistants contributing to economic policy research, and it’s so valuable to have funding to support them.”

Savasoglu made his gift to enable current Yale College students to gain research skills and mentorship.

“If as a result of my small contribution, more students can get the chance to do what I did, that’s great,” Savasoglu says. “Making an endowed gift was a permanent way to honor Tobin’s legacy. Yale will be around for centuries to come, and the only way to maintain it is if we all do our part.” 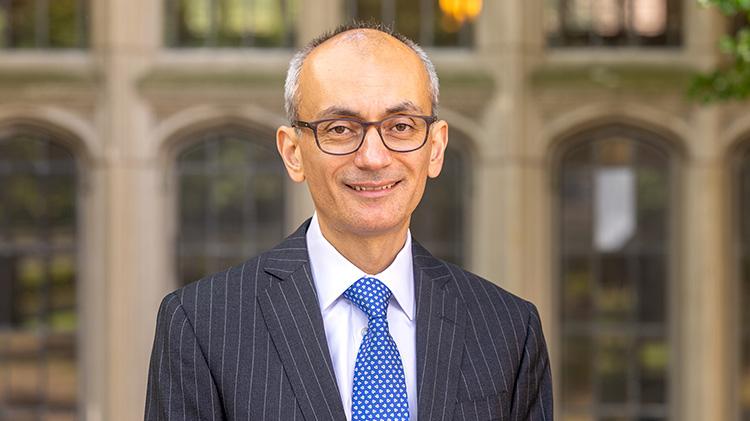 Savasoglu pictured in the courtyard of Berkeley College, where he lived while at Yale.

All kinds of financial support for students at Yale are close to Savasoglu’s heart, as he would not have been able to attend the university without scholarship assistance.

As a student in Turkey, Savasoglu had always dreamed of studying in the United States, especially at Yale, where he was accepted early. But while he was thrilled to have gotten in, he was unsure if his dream could become reality. He knew his attendance was contingent on a sizable scholarship.

Thankfully, the financial support came through, and Savasoglu came to the United States. He had never been to the U.S. before coming to Yale, though any nerves and culture shock were quickly quelled by welcoming roommates and friends who helped him acclimate to American life.

Just a few months ago, his freshman year roommate even stayed with him while in town for their 25th reunion.

“My involvement with Yale did not end at graduation, whether that’s coming to reunions, going to the Yale-Harvard game, interviewing Yale applicants as part of the Yale ASC program, recruiting from Yale or supporting current students,” Savasoglu says. “It’s a lifetime connection. Tobin taught me that.”