In addition to her research in family economics, doctoral candidate Paula Calvo is working to increase the representation of female, non-binary, and minority students in the field of economics. 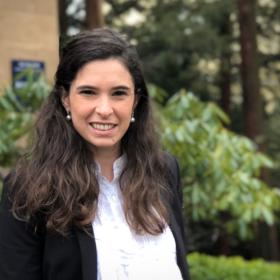 Doctoral candidate Paula Calvo looks forward to a day when the field of economics is driven by a more diverse population of scholars and researchers. At Yale, she’s found the community and resources to help make it happen. “Before I came here, I faced many barriers that I hope to help eliminate,” she says. “I think it’s so important for women and for those from underrepresented groups to be supported in the field of economics.”

One way to lower barriers, Paula has found, is through Yale’s various mentorship programs. Women in Economics, for example, is a program that connects female, non-binary, and minority students pursuing degrees in economics with mentors like Paula. As a former advisor, Paula guided these students in their studies, and she helped introduce even more underrepresented undergraduates to the field. “It was such a rewarding experience for me, and I hope for them, too,” she notes. “I plan to continue working with students in any capacity I can after I graduate.”

Paula’s determination to make a difference in students’ lives mirrors her own work and research interests at Yale. In the Department of Economics, she focuses on family economics, investigating how seemingly routine household decisions can affect the wellbeing of women and children everywhere. “Many of these decisions can contribute to larger issues in the economy, such as lack of gender representation and the pay gap,” she explains. “In the future, I expect my research to reach the policymakers who can reduce these inequalities and create real change for women and their families.”

Coming from Argentina, Paula is grateful to those who have made her education and training at Yale possible. “Growing up, Yale felt as though it only existed in the movies,” she reflects. “I could never have dreamt about coming here without donor support. Their generosity has opened new doors for me, and I am eager to pay it forward for the next generation.”